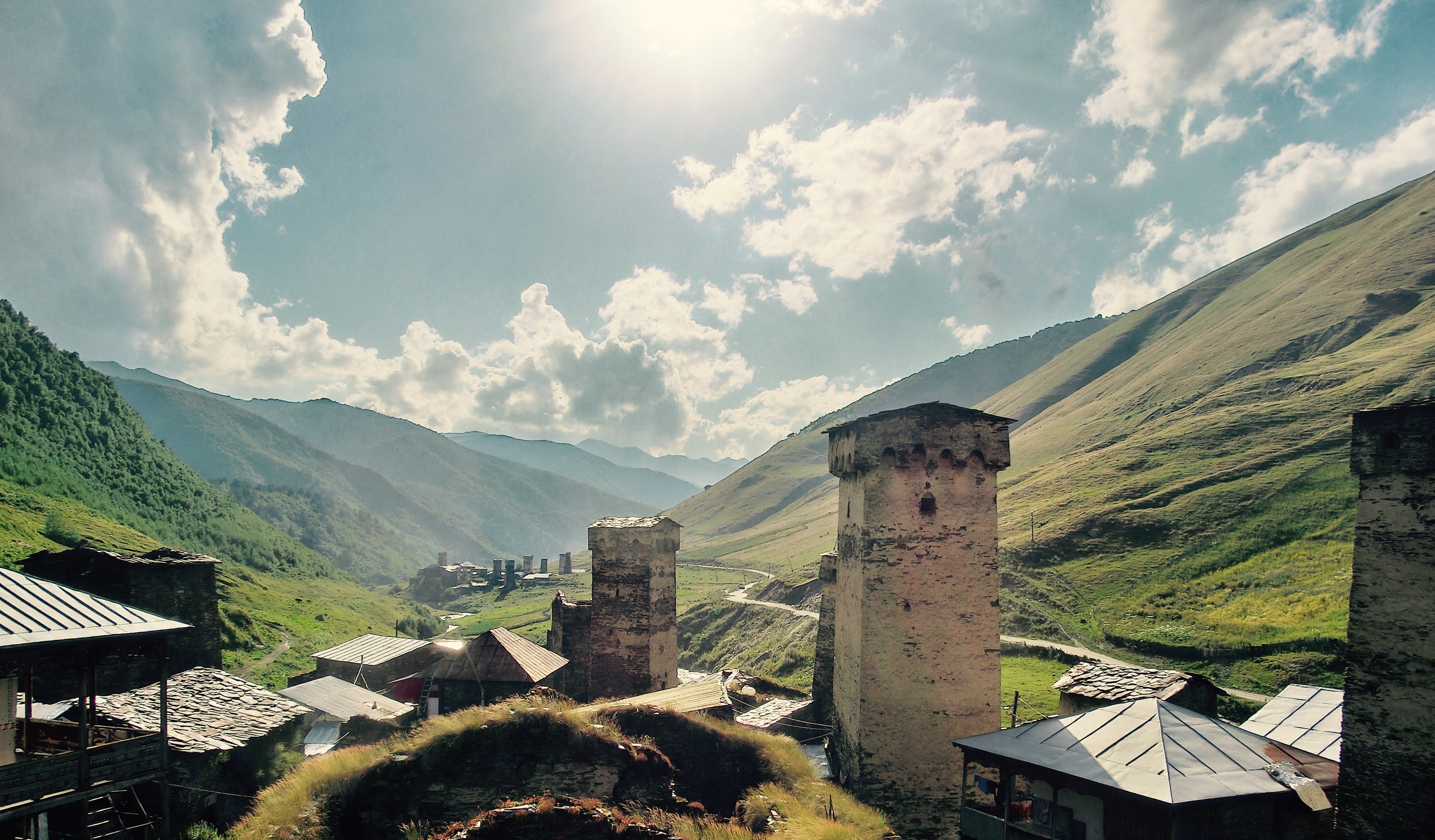 The sunlight conquers the surrounding snowy peaks of the long isolated valleys of Svaneti. It slowly climbs over the high ridges and suffuses the deep valleys with a light. Walking through the flowery lush meadows, breathing the clear cold air, streaming down from the glaciers is like experiencing and old dream. You close your eyes, you lie down in a soft bed of flowers, you breathe in, you realize, you open your eyes and look in the royal blue sky – welcome to Svaneti.

This remote region in the Republic of Georgia was so inaccessible that almost nobody tried to invade the area and even during the Soviet era the life of the people changed little. Until today a strong identity and own culture are predominant. This is accompanied with the unwritten “Svan” language which is widely used in the daily life of the people. The “koshkebi”, stone towers which were built between 9th and the 13th century are dominant landmarks and the insignia of Svaneti. Designed for defense, housing, and personal treasuries, until today these towers are used and inhabited. Since 1996, the towers are protected as a UNESCO World heritage site.

The village of Ushguli

The villages of Svaneti and the landscape surrounding them captivate with an incredible beauty and a feeling of vitality and being close to nature. Anyhow one village, supposedly the highest permanently inhabited places in Europe with an altitude of roughly 2100 meters, called Ushguli, can be rated as the most picturesque and atmospheric spot. Far at the end of the valley, where the river “Enguri” origins, the mighty Shkhara rises to a height over 5000 meters, representing Georgias highest mountain. The view on this massif and its astonishing glacier are breathtaking and binding the eyes to the steep dramatic slopes. You forget time looking at the clouds go by, feel an inner refreshment, reconnect to nature and adapt the pace of the life of upper Svaneti.

Due to harsh road conditions the trip of 45km easily takes up to 4 hours by car.  Since the views and the landscape of this region are so mind blowing, the travel time will fly by. Although many visitors stay there only one afternoon, an overnight stay can be highly recommended to experience the quietness and the warmth of the people of this far-off community. Beyond the borders, Georgia is known for excellent food, and although the Svan cuisine is not as vibrant and colorful as in other parts of Georgia, a few local highlights such as “kubdari” pies should be tried and if well prepared, they will not disappoint.

We arrived in the afternoon in Ushguli, looking for a place to stay when our driver offered us his help. After a few minutes, a girl aged around 14 showed up and greeted us in English. On a muddy track, we walked through the village of Ushguli, passing the ancient towers. Around a few corner, more children were waving and greeting us. During summer the family rents out rooms and their overwhelming hospitality convinced us to stay.

After “checking in” the father of the family returned, turning out to be the villages sheriff and mayor. While sitting at a table with the father, Nina, the mother disappeared downstairs. After chatting with the father in a mixture of Russian, Georgian, Svan and English the mother called us to the dining room. When we entered the dining room, we realized that Nina worked very hard in the kitchen. The whole table was full with food. Fresh salad, cheese, beef, “kubdari”, “khinkali” Georgian dumplings, “khachapuri” cheese bread and different soups. In the people of the table, we saw the most noteworthy “nourishment”,  a bottle of homemade “chacha”.

This popular Georgian style brandy, translated as “fire water” ranging between 40 and 60 vol. % really kicks in.  To be honest, in my opinion, the translation of describes the taste fairly well.  The missing lid of the bottle indicates the host’s expectation that the whole bottle has to be emptied. Finally, we did not finish the bottle because we were afraid of getting another one. In general drinking in Georgia is an emblem of pure hospitality and friendship. The drinking toast easily endures more than a minute and honestly, how cool is that?

After two days in Ushguli, we decided to move on and hike to the next valley. The children waved at us when we left the house and the hosts gave us a warm goodbye.  I traveled to many places around the world, but this place left a remarkable impression. For us, the remoteness, quietness and the warm and welcoming hearts of the people were astonishing. I will be back and see you there.

14 thoughts on “The towers of Svaneti”