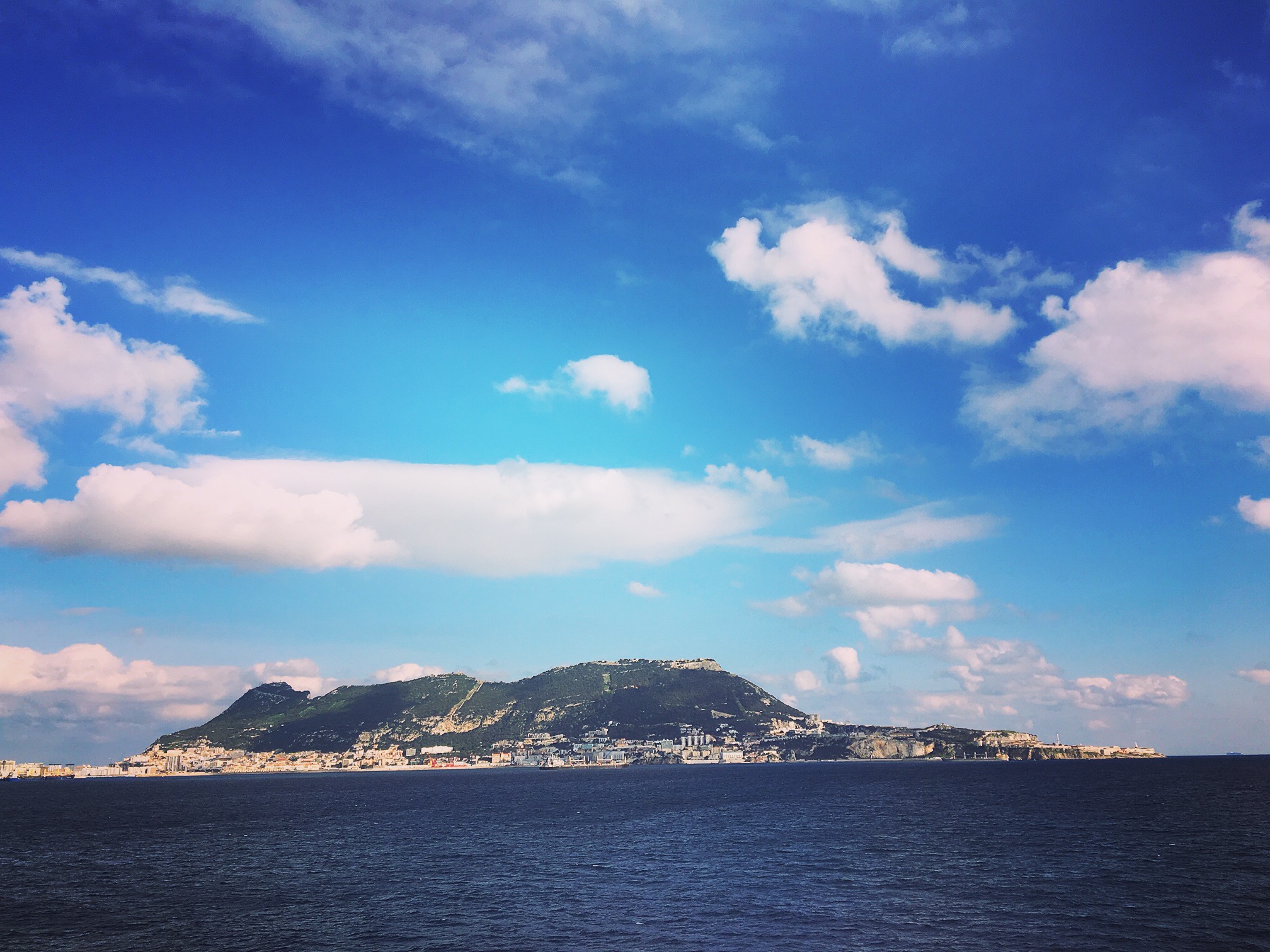 At the very bottom of Spain, a tiny peninsula lurks its way into the Mediterranean Sea. With only 30,000 inhabitants on this spectacular land area, Gibraltar offers a cozy family atmosphere.  During the new year’s celebrations, however, the city turns the beats up with some smashing live music.

When first entering Gibraltar, you will be surprised when you approach a crossing shared by cars, planes, and persons walking on the sidewalk. The problem is that the main way to access Gibraltar from Spain by car or per foot is through crossing the landing strip of the international airport. This actually is pretty cool and fascinating. When casually strolling on the landing strip a unique view of the skyline in Gibraltar is visible.

At first sight, I had imagined significant similarity to Monaco, considering the buildings and the landscape. But as you further discover the peninsula, you will see that in terms of culture these two are not alike. On the main square, called Casemates square, where also the official Gibraltar NYE celebrations take place, one after the next restaurant offered fish and chips. The classic lunch and (in our case)/ or dinner in Gibraltar!

Many other significant influences from the UK are present, for example, the red telephone cells or the national currency – pounds. Surprisingly, there even was the name “Gibraltar” printed on the pound notes.

Gibraltar is known as one of the most fought-over places in Europe since numerous battles occurred throughout centuries. Its strategic location at the entry to the Mediterranean sea has made it a target for battles and sieges ever since. Until 1704 Gibraltar was a part of the unified Kingdom Spain and thereby under the Spanish rule. However, after the War of Spanish Succession, the territory was given to Britain. Since then Spain tried to regain control over Gibraltar not only with military forces but also with economic pressure. In total, Gibraltar faced three wars with Spain and a sum of 14 sieges in 500 years. But they managed to stay under British rule.

During the dictatorship of the Spanish General Francisco Franco, Spain reclaimed control over territory and closed the border from 1969 to 1985, to pressure the UK. Until today the status of Gibraltar is heavily discussed but no conclusion between the British and Spain has been reached.

Nowadays, Gibraltar is mainly self-governed with an own parliament and due to tourism, financial services and shipping industries one of the wealthiest areas in Europe.

The other side of Gibraltar

While most of the tourists only explore the city center and the top of the mountain with the famous monkeys, we decided to take the public bus which took us to the other side of the rock. We got off at Sandy bay, a small settlement with around 30 to 40 houses. To be honest, the British roots of this settlement are clearly visible, since the architecture reminds more of the Southern English coast than the Mediterranean. It really represents the opposite of the city center of Gibraltar as it is incredibly relaxed and you cannot imagine that around 3 km down the road you will arrive at Casemates square. It seems like a different world. Our group decided to walk back to Casemates in order to see the countryside and to enjoy the waves of the Mediterranean Sea.

On the way back to the city we stopped at another small village in order to get some refreshments. Going off the main highway, a small staircase to the right leads the way to the shore. After wandering around this tiny promenade, we spotted a local bar and got some beers as rewards for the walking tour. Entering the pub was sort of strange as everyone looked at us since we were the only tourists. We later got to know some locals there, who told us that everyone knows everyone in this specific bar and normally no tourists are considering to stop there.

Our experience in this bar could not have been any better – meeting the husband of Miss Gibraltar 2009 (supposedly), enjoying some good premier league soccer games with real fans and drinking relatively cheap beer outside with a cool sea breeze. A stop on the lesser known side of Gibraltar is highly recommended for creating extraordinary experiences.

At around 10 pm on the 31st of December, right after having fish and chips for dinner, we decided to walk towards Casemates Square in the city center. The name of the square originates from the British-built Grand Casemates. This building was originally a fortified barracks and casemate. The nearby gates lead through the former town wall of Gibraltar. The whole complex was completed in 1817.

Imagine this main square like a giant courtyard, encompassed by historic buildings, restaurants, and bars. Not only is it a beautiful place to be but it also is the predominant gateway for tourists in Gibraltar.

During this special night, not only young people but also all the other generations celebrated the new year at Casemates. We saw many families with children and even grandparents enjoying the new year and the live music. This was truly inspiring to see! Probably this also reinforced the family-friendly imagine that we now have of Gibraltar!

Moderated by James Neish, the Head of Gibraltar Radio and a famous Gibraltarian journalist, the evening could not have started in any more Gibraltarian way. At exactly midnight the official fireworks started and all visitors were visibly fascinated for a few minutes. Afterward, an incredible Gibraltarian band with the name “Frontiers” absolutely rocked the stage. The three brothers that created the band were born and raised in Gibraltar and are now based in the UK. Until now, they have released several great songs and have played on big stages, mainly in Gibraltar.  Be sure to check them out on Youtube.

For the last two hours, until 4 am, a great performing DJ filled Casemates with the newest electronic music. All in all, a pretty great NYE celebration.

We highly recommend a trip to Gibraltar, especially during NYE. We ourselves are thinking about returning for the next NYE celebration in Gibraltar! It simply was a great experience.

–    Visit the other side of Gibraltar by bus (Bus line number 4 and 8) or be sure to ask locals or bus drivers for the way.

–    Check out the Seawave bar at Catalan Bay Beach.

–   The dispute between Spain and Gibraltar is still ongoing, so if you are interested just ask for the opinions of the locals.
–    If you interested to learn more about this unique area, be sure to visit the Gibraltar Museum. It´s rated as a top sight by LonelyPlanet.
–      Also recommendable is a visit in the Great Siege Tunnels that were used during the British sieges.

2 thoughts on “Spending NYE in Gibraltar”