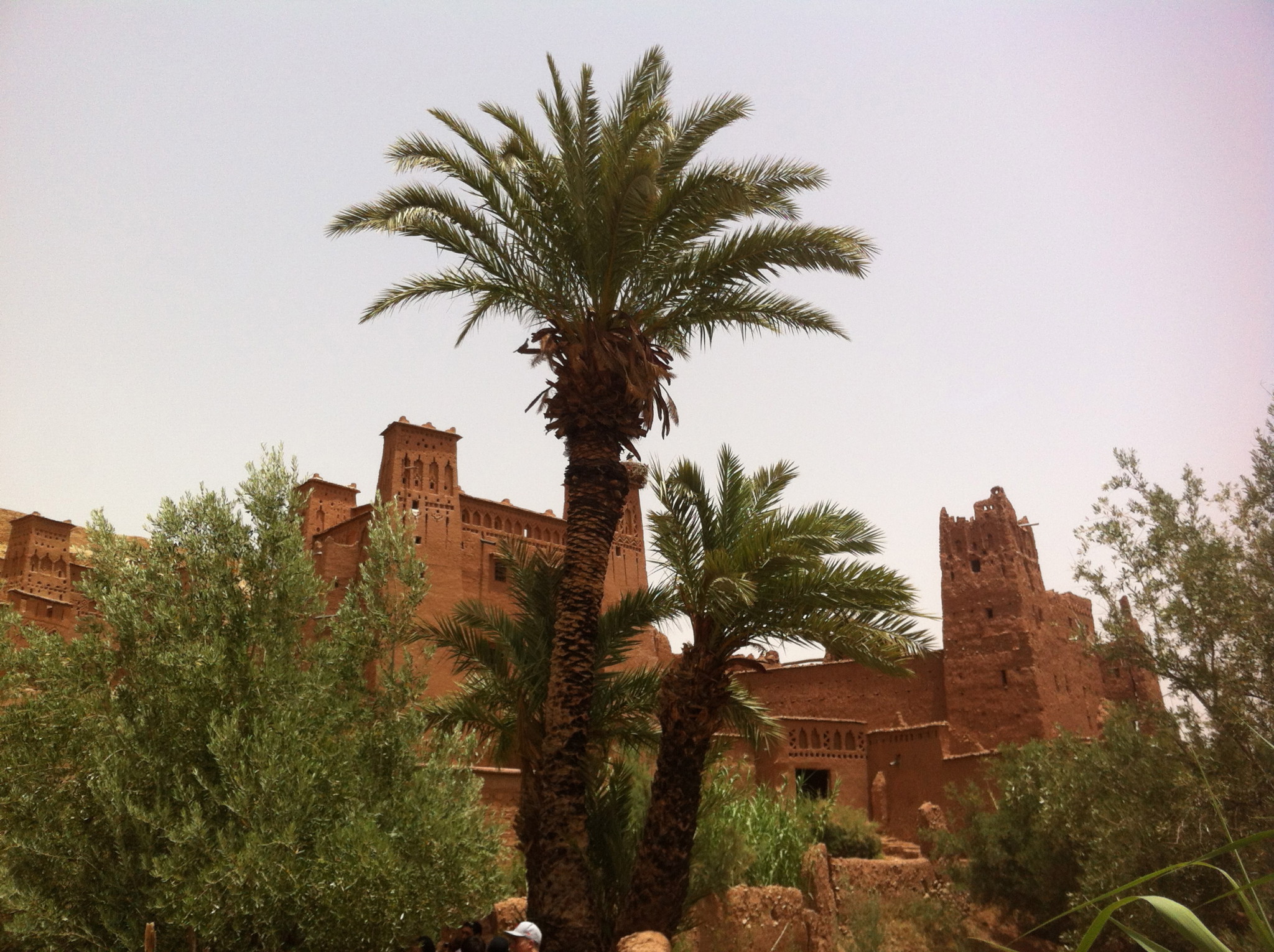 Mystically, the sun disappears behind the sand dunes of Merzouga. Silence and solitude fall around us. Our eyes are wandering along the dunes. From the east a thunder is moving in. Thunderbolts are spreading over the sky. Everybody waits for the rain to start. The wind is picking up. Still no drop of rain. This place is remarkable. It’s harsh. It enchanted us. The beauty and sophisticated simplicity of the desert is almost inexpressible in words.

These word describe my feeling best, when I was standing on a 150m high sand dune in the middle of the Saharan desert. It took us two day to get here. What an unforgettable trip. Let me tell you more about the Saharan experience….!

We started our adventure in Marrakech, Morocco. Our driver Hasan, picked us up early in the morning and we headed to the majestic Atlas mountains. Slowly we approached the mountains, overtaking heavily overloaded trucks, until we reached the pass. The views here are astonishing and people walking along the street were greeting us. Once we reached the other side of the mountains, there she was, the Saharan desert. The sun was burning, the heat was unbearable. Through the open windows of our old Nissan van, air was streaming in. It felt like having a massive hot hair dryer blowing wind in the car.

From Fortified Villages to oases

After 5 hours of driving we reached our first major stop and all inconveniences were blown away.   Before we even parked this place fascinated us. In a mix of Arabic, French and Spanish, Hasan told us, that here, the movies Gladiator and Prince of Persia were shot. The “ighrem” Ait Benhaddou, is truly marvelous. Since 1987, it is a UNESCO world heritage site. Although most people have left this place, the ruins of this fortified village are doubtless an absolute wonder. It´s richness and beauty is due to the strategic position along a former caravan route from the desert to Marrakech.

From Ait Benhaddou we travelled further to the east. With every kilometer we travelled, the landscape became flatter and the vegetation more sparse. But then, on the horizon our eyes caught the silhouette of lush palm trees. We turned to the North and entered a litte valley. The spurs of the Gorge du Dades.

Green fields full of fruits and vegetables. People working in the shade of the palms, harvesting fruits and vegetable. This place is so incredibly peaceful and a festival for your eyes, after seeing the pure aridity of the desert for hundreds of kilometers. We followed the valley and wandered through the green fields. Spectacular cliffs, raging several hundred meters above the bottom of the valley guided us upstream the river.  The scenery of the Gorge du Dades amazed us and the hot traverse through the desert was forgotten, as soon as we laid done under the shade of date palm trees.

The sand desert is calling

Later we continued our trip to the east, to the Algerian border. Mirages were flickering on the horizon of this endless solitude. We left the road and entered no mans land and followed a licked marked sand track. In the meanwhile, Hasan turned on his best of Moroccan Arabic hits. Indeed, it was experience of a special kind to hear a muezzin like voice singing in a radio of a 1996 Hyundai, windows open, in the middle of the Saharan desert close to the Algerian border. The sun was burning. The heat – unbearable. Through the open windows of our old  van, still hot air was streaming in. After another hour of transpiring, we arrived at a fortress-like building, where some camels waited for us.

Now the real adventure began, each of us jumped on a camel and Najib led the herd into the sand dunes for around two hours. The setting sun, enlightened the dunes in a red-goldish color. All of us wore a headscarf to protect us from the sun and the sand, which was carried by the wind. Once we got the the camp, we climbed a dune to watch the sunset. Later the nomads cooked us a traditional dish and it was until today, one of the best meals I ever had. During the evening people sung in the distance in a comforting way. Also hearing some drums, all of us were laying silently on a carpet and were watching up in the dark sky and saying its true, “stars can’t shine without darkness”.

Seriously, the Saharan experience was one of the best trips of my entire life. I can only recommend to do an excursion like this.

If you want to find out more about our excursion or want to do the same. Please do not hesitate and contact me.  andre@huntingplaces.net

The Gateway to the Australian outback

Porto and the Douro Valley