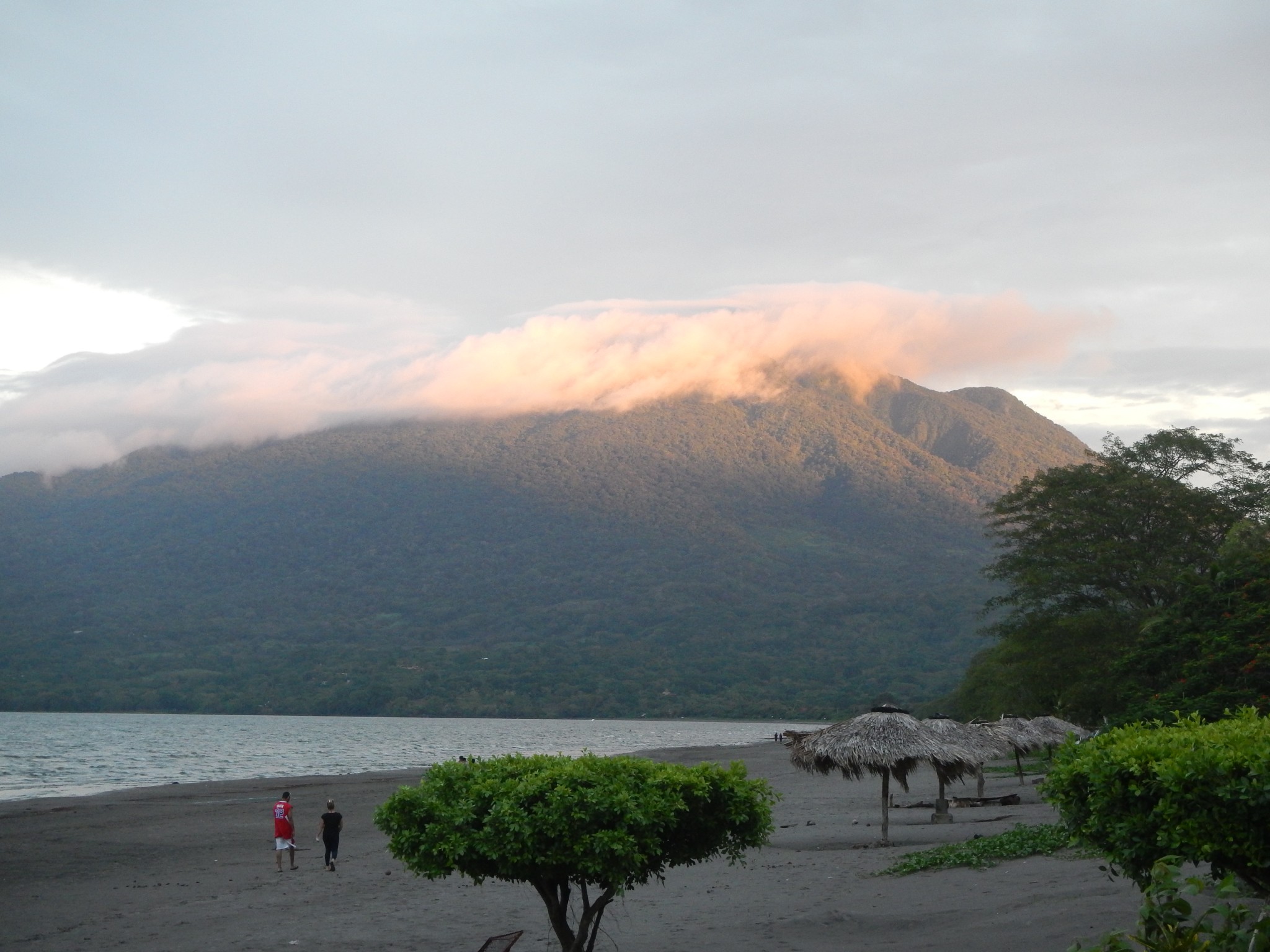 Our journey begins early in the morning. We took a taxi from Rivas to a small port on the shores of Lake Nicaragua. After organizing ourselves some ferry tickets, we boarded a 40 year old rusty ferry.  We left the shoreline behind us and after an our it disappeared completely while the two volcanoes Concepcion and Maderas lurked out of the horizon. Due to the strong head winds and high waves, the boat was thrown around and it took us around two hours to get to Moyogalpa, the main village of the island. Here our adventure really begins.

Isla de Ometepe is a spectacular and secluded place. This green and lush treasure lies in the Lake Nicaragua. This lake is the 19th largest lake of the world  and also known as mar dulce (sweet sea). The volcanoes Concepcion and Maderas crown the islands majestically. Once you get there, you have the feeling to be far off everything, on an lonely island in the middle of an ocean.

High waves are smashing against the quay while we were setting our first foot on the island. Moyogalpa is a simple, but colorful harbour village. Kids and chicken are running trough the streets. You can hear how ice is crushed for mixing another Mojito. Somewhere a guitar is played. Old men sitting on chairs in front of their houses. Until today, I can remember this town very clearly, like and image with sounds and smells. Although there are many restaurants, there are hardly any other tourists around.

After a couple of hours, our totally overcrowded bus left Moyogalpa and we headed to Playa de San Fernando. After 2,5 hours we covered the 27 km to the beach on the East coast of the island. Here some smaller and cheap hotels can be found, as well as a couple of good restaurants. The beach itself is definitely fine for swimming.

Not far from here, the “Ojo de Agua” can be found. Form Playa de San Fernando it is a walk of roughly 40 minutes, but hitchhiking is an option too. The “Ojo de Agua” is a stunning natural swimming pool with crystal clear water. The lower pool is almost 2 m deep and 40 m long, so if there aren’t too many people you can do really good laps in it. It is a great place to relax and calm down. Check out the top of the trees, monkeys are visiting this area on a regular basis.

On the edge around the pools you can doze in wooden sun chairs, read your book and cool down in the soft water when you feel like it. You can bring your own food and drinks, or order beverages and food from the restaurant. An ice cooled coconut can be recommend and bought for just under a dollar.

After two nights in San Fernando, we left for Merida on the South-Western coast of the island, near the volcano Maderas. We stayed at the Hacienda de Merida, an excellent choice and certainly one of the best hotels on the island in general. (http://www.hmerida.com) We actually wanted to climb the Volcano Madras, but unfortunately the weather turned bad and we couldn’t do it. So we just stayed at the Hacienda for a day and walked through the villages, which basically consists of 20 houses. In the afternoon the sun came out again and we went for a swim and jumped of the pier in front of the Hacienda.

There are plenty of activities offered and the staff is absolutely fantastic. But the best part of this place are the sunsets and the breath-taking view of the Concepcion volcano. Sitting there, hearing the birds whistling, looking at the goldenly lit slopes of the Concepcion volcano, having a Toña, Nicaraguan beer, together with roughly other twenty travelers and finally watching the sun disappear in the Mar Dulce – is truly unforgettable.